Don’t Pull the Career Ladder Up:
How Counselors Can Support the ASD Population through Career Counseling

A national survey indicated about half of those surveyed with Autism Spectrum Disorder (ASD) held some form of employment within 6 years of graduating high school; this same survey showed that adults with ASD held the highest rates of “no participation” in education or employment (Gotham et. al., 2015, p. 795; Shattuck et al., 2012). The current prevalence of ASD is 1.6 % -2.6 % prevalence of ASD (Baio et. al., 2018; Hancock, Stokes, & Mesibov, 2019; Xu, Strathearn, Liu & Bao, 2018). An estimated 500,000 emerging adults with ASD will exist over the next decade (Autism Facts and Figures, n.d.). Baldwin, Costley, and Warren (2014), discussed that despite their capacity and willingness to work, High Functioning Autism (HFA) face disadvantages both in the labor market and in employee settings. Findings suggest that this population is significantly more unemployed, underemployed or malemployed than the population at large (Baldwin et. al., 2014). Muller et al., (2003) suggested this population needed different vocational support than other disabilities. Strickland, Coles and Southern (2013) proposed, focusing on social skills acquisition is key for this population’s success.

The purpose of this session is to educate counselors at large about the ASD community and show avenues that we may support this community. By emphasizing the advocacy needs of this population and how counselors could fill the gaps in services that are provided for ASD members. A discussion of recommendations about program creations and career assessments that could be applied to this population will be discussed. 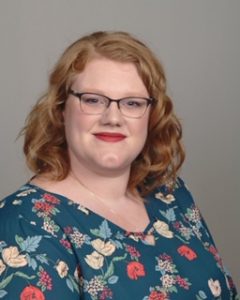 CATHERINE HALLAM Catherine is a graduate of Northwestern University and is now a Licensed Clinician. Catherine pursued her second master’s degree due to her passion for the counseling field. She worked hard throughout her time at Northwestern and not only attended classes but worked in a private practice as a counseling intern.

Catherine currently works with a wide range of presenting issues in both the adolescent and adult communities. Catherine has found a passion for working with the Autism Spectrum due to her personal and professional connection to this uniquely wonderful community. Upon graduating from Northwestern University, Catherine plans to attend Arizona State University where she has been accepted into their Behavioral Analysis Masters Certification program. Catherine plans to gain her counseling license as well as her BCBA license.

Shift Your Mindset During a Pandemic